A stay at Coral Lodge is never complete without a visit to Ilha De Mozambique. This unique and intriguing island holds many years of stories and history that had an intricate effect on the history of many African countries and cities. It was the original capital of Mozambique, and the only UNESCO World Heritage Site in the country. 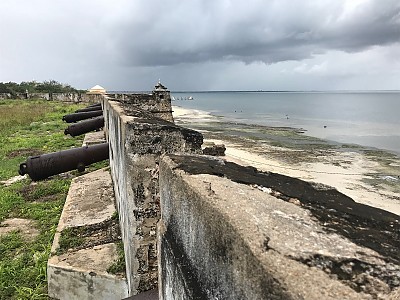 We are able to transfer our guests by traditional dhow to the island which is approximately 30 – 40 minutes boat ride from our lodge. There are some wonderful tour guides, that we work closely with, such as Harry Potter and James.

You can decide if you would prefer to walk with your guide, or there is also a great option of doing bicycle tours around the island too. With a bicycle you are able to see most of the island in two and half hours, keeping in mind it is only 3km long and between 200 and 500 metres wide.

As you walk around you will be approached by the locals (although they are not invasive), to buy their “shipwreck coins” or a piece of jewellery made from shipwreck coins, at a reasonable price. Look out for some really beautiful and unique pieces!

The island is made up of two areas, the Northern side which is known as “Stone Town”, where most of the historical buildings are found, including churches, mosques, forts and cemetaries, some dating back to early 1500’s.  You will find the “Chapel of Nossa Senhora de Baluarte” on the Eastern tip of the island, built in 1522, and is known to be the oldest European building in the southern hemisphere.  This chapel is found just beyond the “Fort São Sebastião” which took 50 years to build, and was completed in 1558.

“Macuti” Town is found to the south of the island, where the houses are mostly made from reeds, and the majority of the islanders live there. You can discuss which parts of the island you would like to explore most, with your guide.

After a few hours of exploring, it is time to have a bite to eat and a refreshment. One of our favourite restaurants on the island is “Karibu”, which has lots of character, and serves mouth-watering seafood.

Once you have finished exploring, our Coral Lodge team will be ready and waiting for you, at the agreed time of your return boat ride to the lodge. Enjoy a sundowner on the beach in our beautiful setting, and reflect on the incredible sights and experiences from your adventure to the unique island of Ilha De Mozambique.

About the Author: Sue Howells